We use cookies to personalize content and ads, to offer functions for social media and to analyze access to our website. We also provide information on your use of our website to our social media partners, advertising and analyzes. Our partners may carry this information together with other data that they have provided them or who have collected them as part of their use of services.
Used Cookies

Embark on an expedition of a different kind with a special guided tour through Schwaz. Explore different aspects of the Silver City with different theme tours. Accompanied by local city guides (Austria Guides). Come with us to places that are normally inaccessible to the public.

"The trades"
Copper and silver brought wealth and paired with skilful negotiation, the opportunity to ascend to the peerage. Their presence changed the townscape. It was the urban district "market". At every step we are reminded of the families Tänzl, Stöckl, Fieger, Fugger and many more. What remained of them are buildings, foundations and works of art. These still represent the significance of their clients today. The tradesmen were also responsible for the introduction of bourgeois and courtly ways of life.
Over time, wealthy financiers from Southern Germany played an increasingly important role.

"The Fuggers"
World politics was written with Schwazer Silber.
They executed their financial and economic empire partly from Schwaz.
On the tour you will get to know the members of the family who were actually in Schwaz.

"The parish church in Schwaz"
The parish church of Schwaz, the largest Gothic hall church in Tyrol, is still strongly reminiscent of mining wealth. During the tour you will encounter important pieces of equipment from different eras.
These include the Gothic baptismal font, Renaissance tomb monuments, baroque side altars, the neo-Gothic high altar, modern glass windows from the 1950s, etc.
A special highlight is the visit to the roof of the parish church. 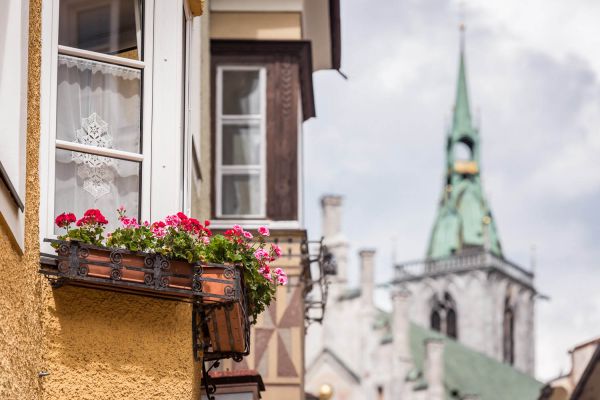 Charming, genuine and genuine - the old town of Schwaz.