An unforgettable experience with the only "high sea navigation" on the Lake Achensee in Tyrol, because here you drive up to the lake.

With the elegance of the ships, the majestic gliding on the largest lake in Tyrol and the professionalism of more than 70 employees, your visit to the Achensee boat trip will be a real treat.

The Achenseebahn has been snorting and hissing its way up the mountain since 1889. From Jenbach in the Inn Valley to the Achensee, it climbs 440 metres in altitude on just under seven kilometres: The Achensee steam cogwheel railway is the oldest of its kind in Europe and continues to be used tirelessly. When it has reached the top and pauses at the lake, a steamer of the Achenseeschiffahrt awaits, with which guests can immediately continue their eventful panoramic journey. The timetables are coordinated.

Lake Achensee was always of interest to the sovereigns because of its abundance of hunting and fish, such as for Emperor Maximilian I. or Archduke Ferdinand II, who had magnificent ships made. When around the middle of the 19th century, when tourism discovered Lake Achensee, Fiecht Abbey, as the owner of the lake, successfully sought a shipping concession. Finally, a steamship was ordered from a Linz shipyard. The individual components were transported with horses from Jenbach to the Achensee and the ship was then assembled in Pertisau. In mid-June 1887 it was christened St. Josef.

Two years later, when the cogwheel railway from Jenbach to Lake Achensee was opened, it became necessary to put a second steamboat,"St. Benedict", into operation. With the purchase of the "Stella Maris" in 1911, which was later renamed the "City of Innsbruck", a diesel-powered vessel was the first to navigate a European inland waterway for the first time.

The easy accessibility and the fascinating beauty of Lake Achensee with the Karwendel and Rofan mountains reaching up to its banks attracted the Tyrolean sovereigns with their numerous royalty centuries ago. Later on, renowned scholars and artists repeatedly chose the area for their summer holiday.
Read more 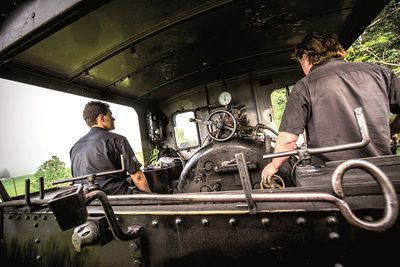 »All aboard!« The journey into the past starts with these words.

»All aboard!« The journey into the past starts with these words.